The Future of IoT: Bacon, Cookies and Ancient Kings? 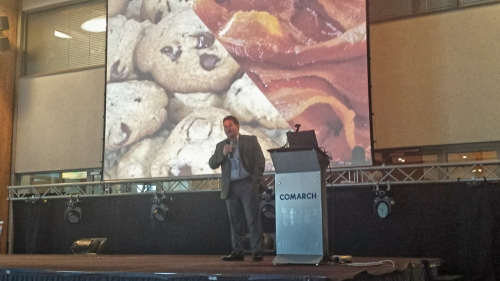 Each year, Comarch invites all of its customers from around the world to Comarch User Group. At the event, the customers come together to share issues and best practices, enjoying multiple days of networking, case studies, presentations and fun from the international technology provider. Comarch User Group 2014 was held at Comarch’s global headquarters in Krakow, Poland, and featured a unique keynote presentation from Marcin Kosciak, VP of CRM and marketing at Comarch Inc.

Kosciak explained to the crowd how important Internet of Things (IoT) and beacons are to modern customer engagement. And although the Comarch Beacon solution was recently introduced, Kosciak revealed that the history of beacons can actually be traced back thousands of years!

Reminding everyone that beacons are small devices that communicate with other devices via Bluetooth technology, Kosciak then introduced the audience to King Harald “Bluetooth” Gormsson, who ruled Denmark and Norway in the late 900s. Much like King Harald connected the areas of his kingdom that are now Denmark and Norway, Bluetooth technology is named after its ability to connect different devices to one another.

Kosciak went on to describe the evolution of commerce and retail, detailing the emergence of general stores, which soon led to sales catalogs and direct-mail shopping, which in turn led to the popularity of shopping malls. According to Kosciak, the explosion of QVC and other home shopping networks was an early start to the major digital shift in commerce – and the dot-com bubble of the late 1990s pushed it over the edge, turning e-commerce into the giant industry it is today.

However, the rise of e-commerce doesn’t necessarily mean that brick-and-mortar retail is obsolete. While the digital and physical worlds used to be completely separate environments, distinction between the two is becoming increasingly blurred. Even Gartner understands that in order to engage people in today’s dynamic world full of digital distractions, digital and physical worlds need to be seamlessly integrated – and Comarch Beacon will do just that.

Kosciak, a native of Poland, admitted that the first time he heard the word beacon, he mistook it for bacon. And while bacon is engaging and great in its own ways, he didn’t understand how cured cuts of pork belly would have an impact on customer experience. Beacons are physical gadgets that digitally transmit packets of location data to other devices. All the beacons are “saying” to smartphones and other devices is, “I’m here,” explained Kosciak. How that location data is configured with certain apps is what makes beacons useful in a variety of ways and valuable to customer engagement. 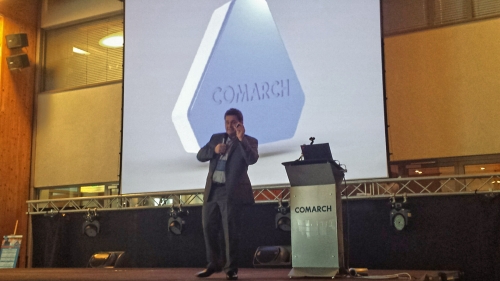 Beacons can act as a tag on suitcases to notify owners when their luggage is at the correct carousel, when it’s been rerouted or even if it’s been stolen. Used in a hospital or doctor’s office, beacons can be used for identification and transfer patient medical records to the physician’s tablet as soon as he enters the room. At a museum, beacons can be used to transfer multimedia content to visitors’ phones as they approach a particular item or exhibit.

The greatest potential for beacons, however, is in retail. When used in a mall, beacons give store owners the ability of knowing who their customers are, as well as what they are interested in, as soon as they walk in the door. Connected with the mall’s app and loyalty program, the users’ smartphones would have detailed information on their past routes taken through the mall, preferred stores, purchase history, spending habits and more.

Using browser cookies, it is very easy to track customers online and send them contextual communication tailored to the individual – but those same capabilities were not available in location-based settings. According to Kosciak, beacons will act in the physical world just as cookies act in the digital world. Beacons will provide a true omni-channel experience – for businesses and end users alike – and bridge the gap between online and offline customer insight.

"It’s not for everybody,” Kosciak said of using beacons to boost customer experience. “But it’s not designed for everybody… it’s designed for your most loyal customers.” Kosciak understands that Comarch Beacon is a very advanced solution that may seem like something out of a sci-fi film. And he realizes that some customers won’t like the idea that they’re being tracked in physical locations. But the beacons will benefit the most loyal customers of a particular business: the top 20% that shop on a regular basis, don’t visit competitors and are hyperactive members of the loyalty program. These types of customers are generally looking to get the most out of the loyalty program anyway, so they will be willing to share their location data and use beacons. They will understand that it will only further enhance their experience with the business they already love.

Future of the Technology

Kosciak offered a lot of insight into the future of beacons. He specified that the potential of beacons is not just limited to communication with smartphones: there will be all sorts of devices coming out in the near future that can be integrated with beacons and used to optimize customer experience.

A potential issue he sees for the future is, once beacons are fully integrated into the modern CX landscape, the environment can become overwhelming with tens of thousands of active beacons operating in close proximity to one another. Kosciak believes that standardizing the technology in some way – regulating how, where and when beacons are used – will happen eventually.

Beacons are complicated, but when implemented properly, they have the potential to revolutionize customer experience as we know it. The possibilities are almost infinite, and Comarch Beacon will have a notable presence very soon. With beacons being as tempting as bacon and able to provide cookies in location-based settings, the late King Bluetooth would be proud to lend his name to such innovative technology!