Comarch goes up in the prestigious Truffle 100 Ranking

Truffle Capital has already released the ninth edition of its ranking of the top 100 among the largest European IT companies providing services for the business sector.

Comarch - the Polish software company based in Krakow – improves its position from the previous years. 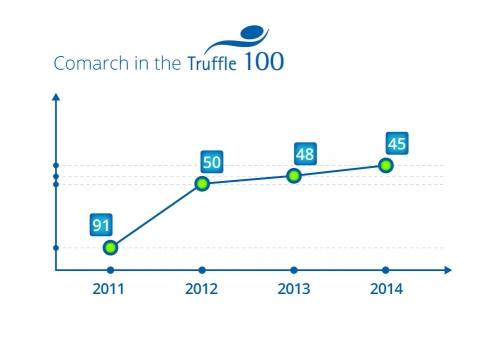 The Truffle 100 ranking is conducted on a yearly basis by IDC&CXP Group under the auspices of the European Commission. The classification of business entities is prepared by IDC analysts and is based on the criterion of total revenues generated by companies in the last year. Bo Lykkegaard, IDC Research Director, observes: - The European software industry is currently undergoing a massive transition. Consumer driven trends, such as smart phones and tablets, social networks, predictive analytics, and cloud computing, are affecting every corner of packaged software. The consumer trends have significantly raised the expectations of business software users.