Polish and German government delegations have had the opportunity to see Comarch debut its cloud computing model on the German market. Products and services in cloud computing technologies, which are dedicated to small and medium-sized enterprises operating on the Germany market were the main theme of Comarch's offer at CeBIT 2013 in Hanover. Comarch has set its focus on offering cloud services to small and medium-sized enterprises. The company’s motto is: “Because Growth Requires Flexible IT” (German: "Weil Wachstum flexible IT braucht"). 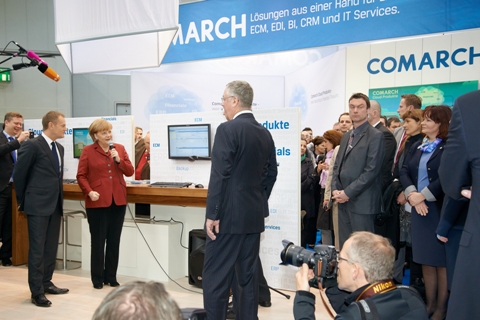 Starting in March, Comarch will offer its proven ERP, financial, ECM, and EDI software solutions for small and medium-sized enterprises in the private cloud model. The idea behind this offer is “worry-free IT” providing quick implementation, high reliability, guaranteed data protection and unlimited scalability in data centers within Germany.

Comarch has invested 10 million Euro in the construction of its data center in Germany and in its virtual private cloud model.

The Hanover fair is one of the largest meetings of ICT sector representatives in the world. Since 1986, CeBIT has triggered countless new business contacts and has given impetus to the development of the IT industry. In 2012, more than 4,200 exhibitors from 70 countries were seen by about 312,000 people. Poland was the official partner country for CeBIT 2013.