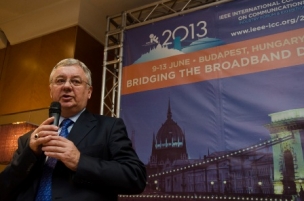 As Comarch continues to successfully expand around the globe, its success is confirmed by the nomination of Professor Filipiak for this distinguished award. He is the author of more than one hundred IT related publications, some of his  articles were published in: “IEEE Transactions on Communications” and “IEEE Journal on Selected Areas in Communications”.

The history of the IEEE Communications Society Distinguished Industry Leader Award dates back to 2001. People who have made remarkable contribution to the development and introduction of new trends in the field of information and communications technology are honored with this award. Criteria for award nomination include: universal acknowledgement and international availability of products, good financial results and the degree of recognition and authority of the nominees, among others.

Professor Filipiak is the ninth personality from the world of new technology who has been nominated for the IEEE award. Since being founded in 2001, there have been three years when the jury could not find a deserving representative from the world of telecommunications.

The ceremony was held in Budapest where Professor Filipiak was awarded the prestigious statuette, during the Bridging the Broadband Divide conference. Event organized by The IEEE Communications Society was dedicated to communication on the international stage.